On a chilly, rainy Sunday in October, David Bradstreet, a 53-year-old former police officer and father of two from Crystal Lake, Illinois crossed a makeshift finish line in Chicago.

He had just completed the 2018 Chicago Marathon as part of Team Healthy Kids, hours after race officials tore down the course. With his coach, Seth Kopf, by his side, David finished his 26.2 miles and was greeted by his excited and proud family.

David’s journey started three years ago, when he retired from his job due to poor health from type 2 diabetes and high blood pressure and made the decision to get better. He created personal challenges for himself that started small, like walking a block, and moved to things like 5Ks and a half marathon. At one point, David was walking over 30,000 steps a day. Lately, David has incorporated yoga, strength training, and help from a nutritionist into his health routine.

But it’s running that David feels most passionate about. “I didn’t really connect with my community until I started running. Everyone in the running community has their own inspirational story, and they are accepting, non-judgmental people.”

David met Seth through this community, and for the last year, Seth has been coaching David in preparation for the Chicago Marathon. “Words can’t do justice to the amount of work David’s put in. It’s one thing to follow a plan and training schedule, but his investment shows that’s he fully bought in,” said Seth. “A lot of runners don’t fully commit to training for a marathon, but David wanted it to be a life-changing journey. David has really immersed himself in the running community because he loves what it has done for him.” 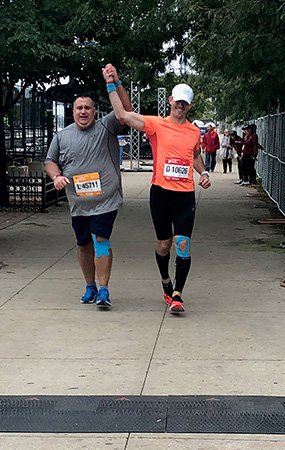 On race day, David woke up excited but exhausted with worry. Despite the rain and a tightening in his hip that eventually spread to pain through his right leg, David never lost the mental energy necessary to stay engaged through the entire race. His body was in pain, but he never got despondent or gave up. With Seth by his side, David finished the final 13 miles on the sidewalk after aid stations and the rest of the course had been disbanded. They grabbed unopened endurance chews and water bottles that had been left lying around.

“I thought, ‘I can’t believe I made it. God, I am so happy to be done. But I am so glad I did it!’” said David. Though he had been walking, he ran across the makeshift finish line to put a final exclamation point on his accomplishment.

Seth described it as the most impressive performance he’s seen in seven years of coaching. “We could have thought about everything like ‘woe is us,’ but it was actually a perfect representation of what David’s been through and the challenges he tackled to get to this point.”

Added Seth, “Without a doubt, the greatest thing to come out of this is what the journey means for his sons. It’s had a positive impact on his children’s lives.”

Running to benefit Action for Healthy Kids meant a lot to David. “I’m finally taking control of my health. It nearly wrecked my life and killed me. I want my boys to be healthy, and I want kids to have healthy choices at school. We need to prepare the next generation to be better than we are.”

The upside of finishing the race after closing time? David got to experience something most marathoners don’t at the finish line: His son presented him his medal.